Chuck Baker - It Is Coming, Holga

Chuck Baker - It Is Coming, Holga

Kahn-Hoffman - Hope As In A Dream, Handmade Pinhole

Kahn-Hoffman - Hope As In A Dream, Handmade Pinhole

Krappy Kamera winners, guest exhibitor Anne Arden McDonald
EXHIBITION DATES: March 8, 2017 – April 1, 2017
OPENING RECEPTION: Tuesday, March 7, 2017, from 6pm to 8pm
The gallery is proud to present its annual Krappy Kamera exhibition, including the winners of the 2017 International Competition, a group show by Soho Photo Gallery artists and a show of Anne Arden McDonald’s dreamlike images. The Krappy Kamera Competition originated at Soho Photo Gallery 19 years ago and is one of the gallery’s high points of the year. Russell Joslin, the competition’s juror, is the sole editor and publisher of SHOTS Magazine as well as a photographer and author. He judged images captured with krappy kameras including Holgas, Dianas and homemade cameras. “Fuzzy, distorted, and light-leaked images dominated the entries and afforded me the opportunity to compile an exhibition that collectively lends itself to a meandering, dreamlike narrative. Nearly every photograph drifts freely into the realm of abstraction.” Anne Arden McDonald is a widely shown fine art photographer as well as a teacher, author and lecturer on staged photography, self portraiture and alternative photography. Her images were shot using a plastic Diana camera. “Rise, Fall, Float is a series about vagueness and half-remembered subconscious images. Each of these pieces is part of a visual poem which, when seen as a whole creates a sensation of falling or floating. With these images I am trying to build on mood that elude the specifics of narrative.”
Krappy Kamera is sponsored by: 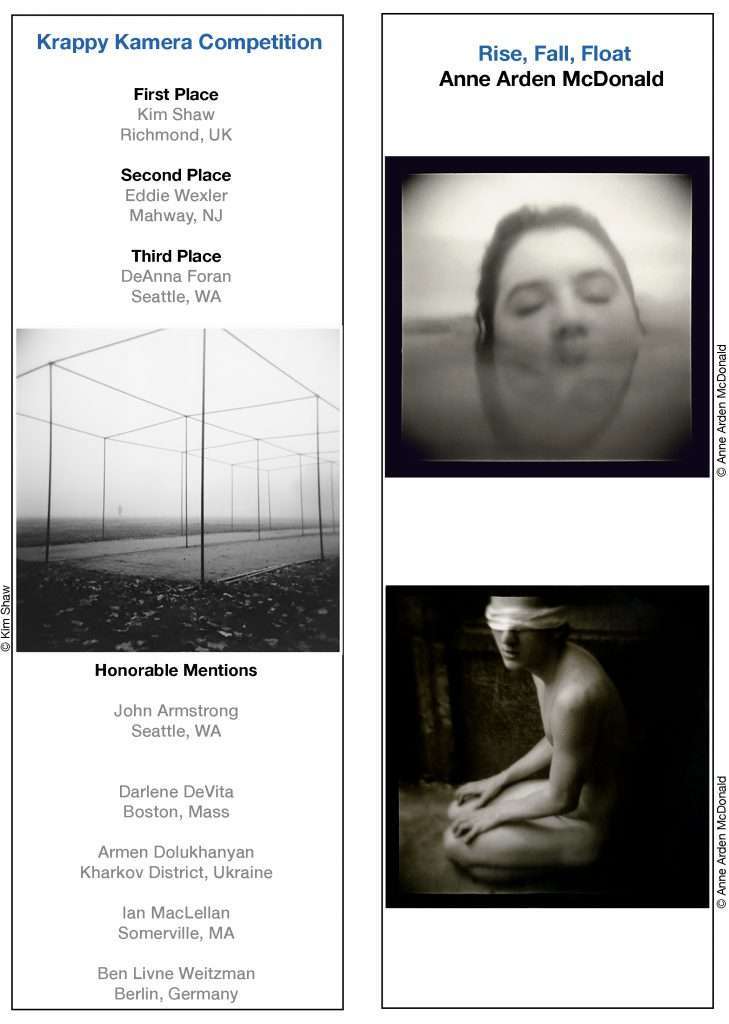