I am going to be part of a group exhibition, Abstract Rhythm and Blue Notes, at the Sohn Fine Arts Gallery in Lenox, Massachusetts.  The exhibition is from September 9 – October 3. 2022. Opening reception is September 10, 2022,  4-5:30 pm. 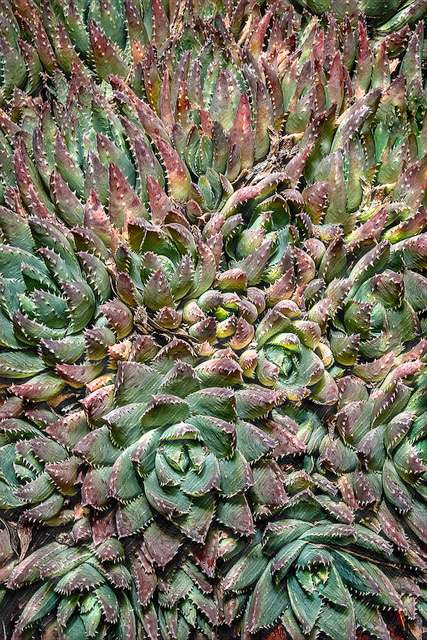 My image, Chicks and Hens was selected for an online exhibition called Plantarium 2022 by a Canadian group called Gallerium Art in Ontario. The exhibition will run from September 15 – October 15, 2022. 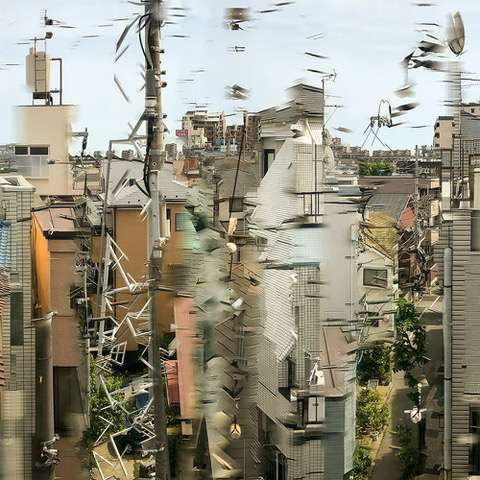 While many of you know I’ve been on Instagram for years, I am now experimenting with being on the Instagram alternative, Vero.

I’m trying out different accounts for different topics (well I’ve only done one so far!). Check it out. I think in both cases to follow me you would need to create an account of your own, but you can view me from the links provided.

FYI: Vero has no ads, no algorithm to determine who sees what (it is all chronological), and the look is more striking. Downside for me personally is that it is mostly populated by people that shoot nature (not exactly my thing)… but all the work is beautiful. Still trying to find my niche. 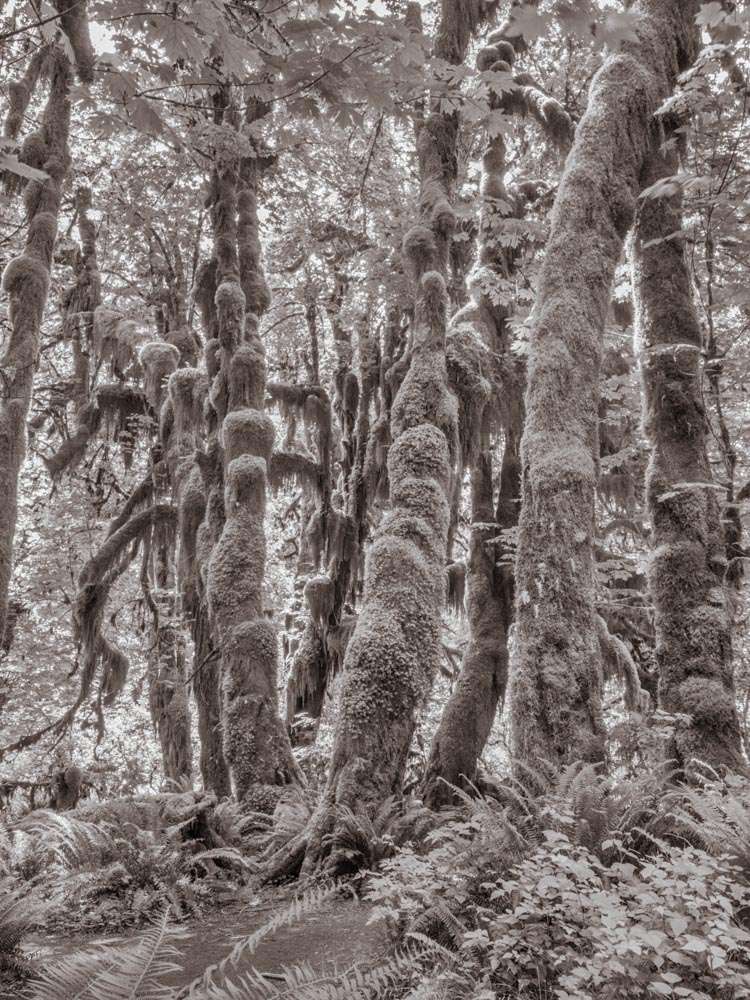 Mandy Seligman developed an international website that helps people focus their mental energy on positivity and find what makes them happy. It uses photography and the principles of the well-established Positive Psychology to accomplish this goal.

Mandy asked Alec Rill to write a blog describing how street photography transformed him as a person. Here is the link to the website, anyone can post pictures that make them happy and describe why (for free). The website features projects of people posting photos from various countries including Ukraine, Russia, Israel, the U.S. and more. Here is the link to the website and links to the announcement of Alec’s blog and the first post.
​ 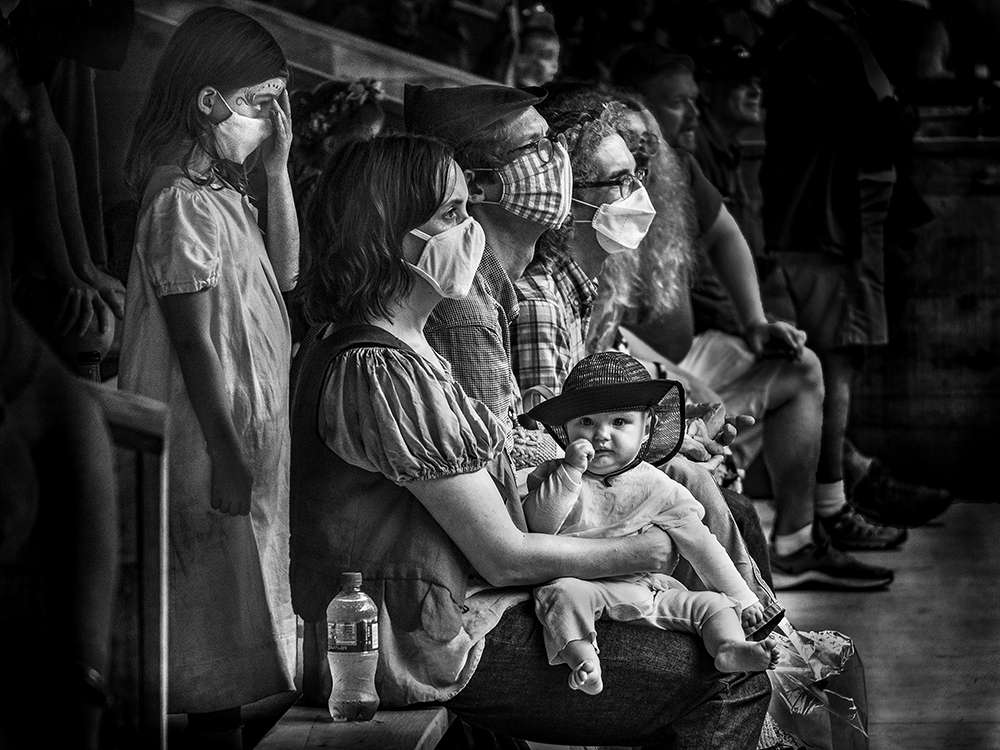 I’ve been working on my book projects, etc, and also won The Philip Eisenberg award, for “Emerging from the Darkness” at the historic Members’ Show at the Salmagundi Club.

(The two sides of George Grubb) 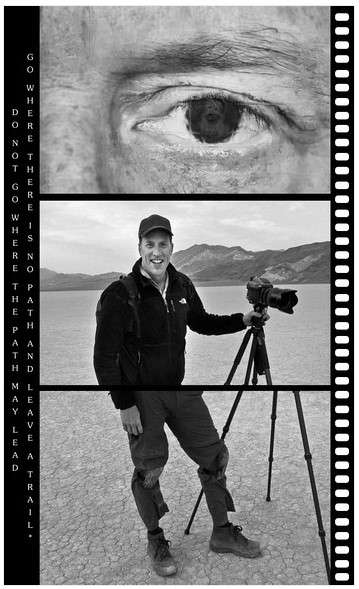 A professor once sat me down and said “George, your problem is you can’t decide between Ludwig and Raul.” I asked, “who?” He replied “Ludwig, your left brain, and Raul, your right brain.” I’m guessing I got that lecture back in the early 1980s. When I later looked them up, I ran across a German theoretical physicist, named Ludwig, who originated quantum theory, which won him the Nobel Prize in Physics in 1918. And the list of artists named Raul seemed to go on indefinitely. Thus, I grew to accept that sometimes, I am more Ludwig, and other times, I’m Raul.

For most of my life, I have split my time between pursuing artistic endeavors and more data-driven, left-brained business initiatives. Even in education, while completing my BAs in Economics and Business Management, I would venture off to summer cinema schools at the USC Southern California and NYU. Then I went and got my MBA only to follow that up with an MFA in film from the American Film Institute. As you might imagine, I was quite confused about where my career path would lead.

My inner-Raul was probably instilled at an early age when I was given a super-8mm movie camera at the age of 10. I was soon given a Minolta 35mm film camera a couple of years after that. The art and science behind the lens would from then, forever fascinate and intrigue me.

Ludwig was also probably instilled early in my years, too, given that math always came easy for me. Post college, I would split my time between screenwriting and film production work, to also work as a real estate broker writing financial investment plans for real estate ventures. I would often serve on condo boards, acting as the treasurer of my board in Seattle. In 1999, I launched a video-audio internet hosting service there that would grow over 3,500 corporate clients and eventually become acquired by a public company.

When I finally exited the company post its buy-out around 2007, I began traveling the world with wildlife photographers to extreme places on Earth, photographing the walruses of Svalbard, the penguins in Antarctica, polar bears on the Arctic ice pack, and the wildlife of Africa. My interest in environmental photography and especially, in endangered species, grew. The crash of 2008 – 09 was an awakening for me, and a reminder to keep one foot on the Ludwig accelerator. I took up a position on a real estate company’s board for about 15 years, served on the board of the Bellevue Art Museum (WA), and joined the Certified Market Technicians Association in NYC, while forming my own investment company to manage my equity investments.

In my spare time I traveled the globe with some amazing photographers, learning their craft. And I also benefited from the various photography clubs that I belonged to, such as the New York City Sierra Club Photography Committee, Park West Camera Club, the Photographic Society of America, the Salmagundi Club, and I would soon join Soho Photo. But my first attempt to acquire membership in 2011, was rejected – my portfolio being too varied in its theme. But I would soon return the following year with a new portfolio and application, and successfully be welcomed into Soho Photo.

Today, I’m honored to have been elected to lead the treasury function of Soho Photo; a role that both, Ludwig and Raul will happily collaborate and cooperate on. I also look forward to learning more about this historic and amazing organization and getting to know each of you better. They say we get out of what we put into something, and I’m finding that to be very true at Soho Photo. With each new day, I relish and enjoy the creativity and innovation within this organization that inspires me to reflect, rejuvenate and re-imagine what is possible. I thank you for your trust and this honor to serve Soho Photo as its treasurer. I look to serve this role with my utmost integrity, prudence, accountability, responsibility and collaboration with all of you.

Yes, We Have Interns 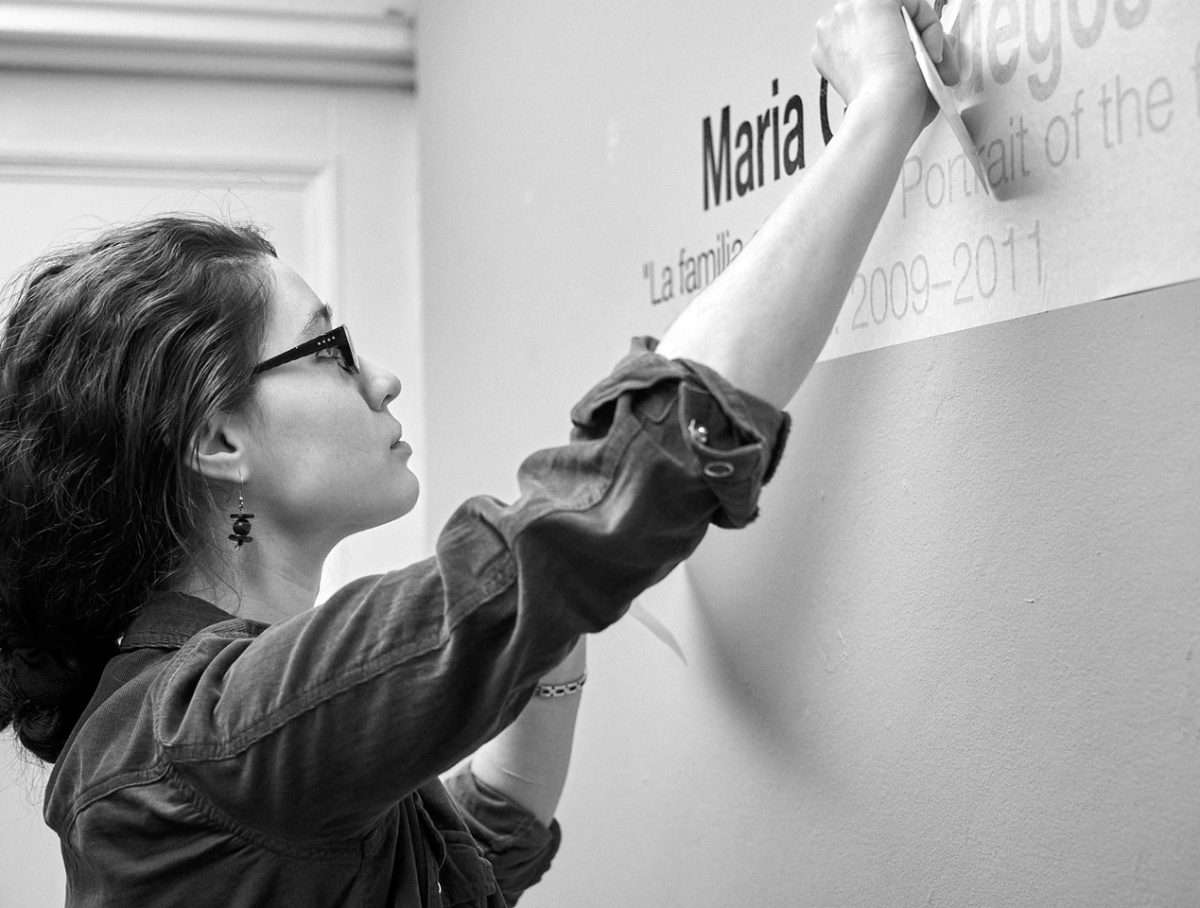 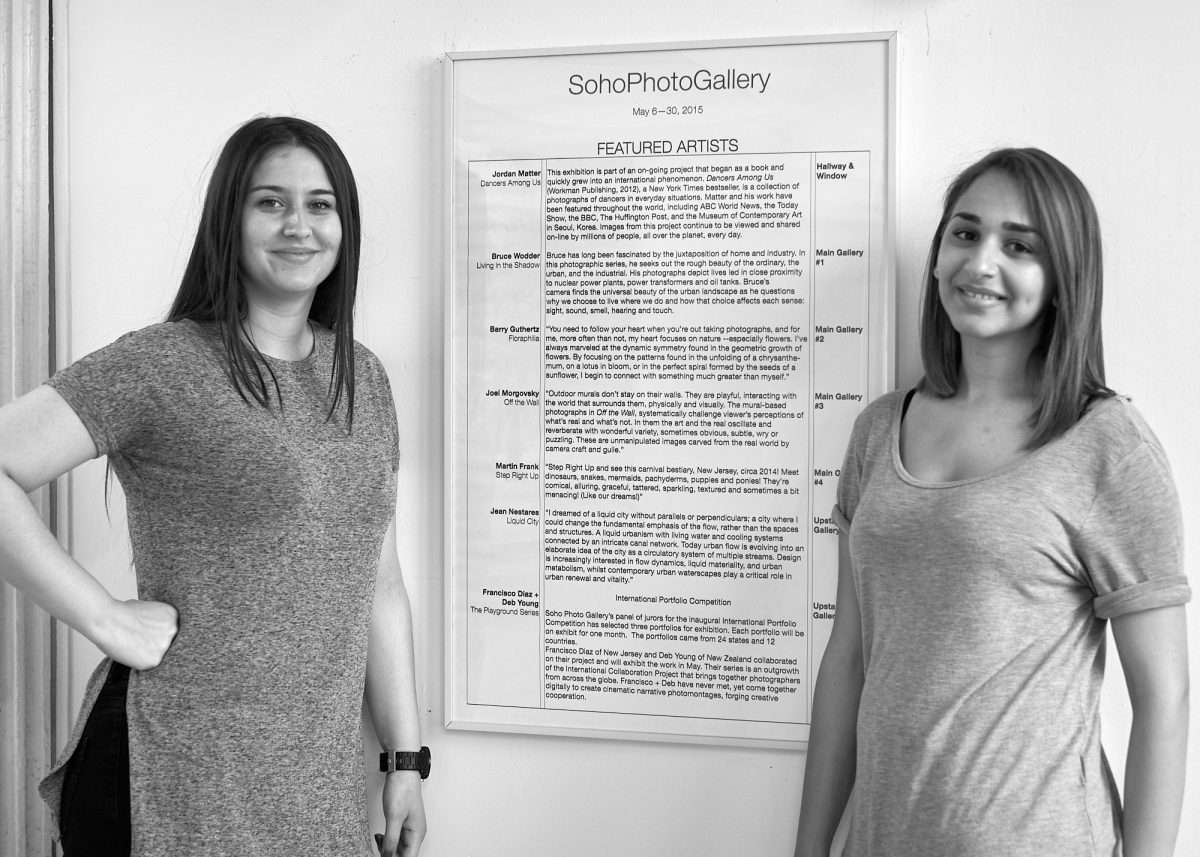 One person quietly raised her hand in the fall of 2014 saying she studied photography at the Fashion Institute of Technology and that she needed an internship. Would Soho Photo Gallery host her? Being an all-volunteer organization that depended on the involvement and energy of many people, we replied affirmatively.

And so the internship program began in the spring of 2015 with Ariel Williams. Followed that summer by two business students from France. Since then, the Gallery has hosted some two dozen (mostly) young people from Asia, North and South America, and Europe. Many have been FIT students receiving credit for their time with the Gallery. Some come from other colleges and universities. Others have had careers before interning. All have been interested in how a photography gallery is organized and how a cooperative works. We now often have several interns at a time instead of just one; in 2022 we will have hosted 11 interns. Because of two different fund-raising events we now have the resources to offer modest stipends.

Interns have staffed the Gallery, helped with installations, given their opinions at Salons and Portfolio Reviews, worked on competitions, revised some of our social media efforts, put out the trash and recyclables, stocked the bathroom with TP, assisted with various 50th Anniversary celebrations, helped us navigate the perils of Covid-19, retrieved a photo printer, hosted their college intern seminars in the Gallery, and recently curated their own photography exhibitions.

We have benefitted greatly from their youthful energy, from their great familiarity with social media, from their optimism, from their challenges to us, from their questions, and from the great diversity they have brought to the Gallery.

The interns have met quite a variety of people as they interact with many different members. Photographic insights and techniques have been shared. Some wonderful artistic and professional relationships have grown between members and interns. One benefit for the interns has been friendships with older adults who are not their teachers, aunts, grandparents – colleagues.

I am honored to work with these young people, and I am grateful to all the members who give their time and energy to the interns.